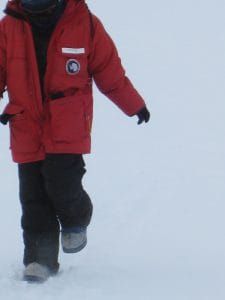 This morning I noticed very unusual drifting patterns created by footsteps. The steps compact the snow and over time the wind blows away the surrounding snow leaving these beautiful sculpted mounds, distinct from the surrounding drifts. These are marks made by all of us shuttling to and fro with our boots and machines.
At the center of this camp, it seems we are creating an enormous impact to this space, until I remember our flight, seeing hours of white drift patterns in a large sea. We are a small boat, barely visible at 20,000 ft. Within a few decades, snowfall will have entombed it all; my footsteps stretched out by the moving ice.
I thought to photograph these marks, but Anais suggested that I might try to make some patterns myself. After bundling up, I walked out into a space that wouldn’t be plowed and tried to orient myself to stamp out a grid pattern. I began by orienting with the mile marker flags to the north, west and south, used to gauge the cloud ceiling for aviation. I began facing north, stomping out 50 paces and then turned south, counting out. Between the light and my goggles, I found it difficult to make out which of the groups of flags were west, but oriented with the wind and continued. I tried to turn 90 degrees each time, stamping out equal paces, until I had marked out a rough rectilinear maze into the center. As I followed the path back out, the way was sometimes clear, sometimes erased by the wind. I was struck by the powerful metaphor of this activity, my life in a series of paces.
This experience was amplified by the distinct fear I carry about being stuck in a white-out. I know it can come up quickly, and the few hundred yards to the nearest structure would become unreachable. The radio in my pocket reassured my rational mind. But my hind brain still registered fear. Even with structures and flags defining the spaces, the white dominates, creating little ghosts in the edges of my mind.