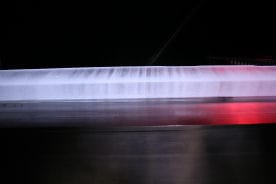 In November 2007, I traveled to Denver, Colorado to spend three days drawing ice cores inside a freezer at the National Ice Core Laboratory.  This spontaneous trip was driven more by curiosity than a worked out plan and on the way there I began to worry.  I had to face the possibility that the ice may elude me.  Perhaps my fingers wouldn’t stay warm enough, or my pencil would break, or I would stare into the transparent cores and literally draw a blank.  Would inspiration grab me?  Could I capture some essence of their beauty?

The previous winter I visited inland Alaska and was mesmerized by the permafrost landscape and immense glaciers we flew over.  I traveled around the area talking with paleoecologist Matthew Wooller of the University of Alaska, Fairbanks about isotopes and how scientists reach back into time by studying subtle changes in earth and ice.  I have been drawing cliff faces, trees and landscapes for several years and enjoy thinking of the physical world, our planet, as a large repository of time and memory.  As I read more about these frozen landscapes, I learned that glaciers contain incredibly long, detailed records of past atmospheric conditions, more than tree rings or sediments.  Scientists study these records by taking core samples of the ice.

I tracked down Eric Steig, a professor at the University of Washington who studies ice cores.  He told me about the deep ice core project underway on the West Antarctic Ice Sheet Divide (WAIS Divide).  He was encouraging about pursuing the subject artistically and gave me a short list of must-read books.  He showed me some of the cores stored at his lab, but recommended that I plan a trip to NICL to see particularly beautiful ice from Greenland’s GISP2 deep core.

The National Ice Core Lab is located in building 810 in the Denver Federal Center.  The building is enormous (approx 680,000 sq. ft); NICL facilities are dwarfed inside of this building.  The 8,000 sq.ft. freezer sits there like a giant picnic cooler.  Most of the deep cores taken from Greenland and Antarctica by U.S. science teams are stored here. 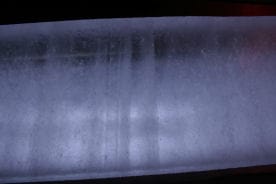 After changing into a big pile of warm clothes, I met Assistant Curator Eric Cravens in the examination room of the freezer, maintained at -14 degrees Fahrenheit.  There was a special table enclosed by blackout curtains with a trough that held one of the more interesting cores in NICL’s collection.  It was taken from a depth of 1841 meters, part of the GISP2 Greenland deep core project.  The ice is approximately 16,000 years old.  I was transfixed by its beauty and humbled by the realization that I would never capture it with pencil and paper.  But the sketching was mostly a disciplined exercise to spend several hours looking at the ice.  This core has distinctive strata with alternating clear and cloudy layers.  The various shades of translucency are a direct effect of the number of gas bubbles in each section.  Scientists determine a great deal of information about the parent glacier and climate patterns from the quantity, shape and size of these bubbles.

Gazing into the ice was like looking into the sea, I had the sensation of staring into a great depth.  Gas bubbles are suspended throughout, crisp at the surface, fading toward the center.  Occasionally an ice crystal refracted into a tiny rainbow.  Each bubble holds precious ancient atmosphere.  I imagined all of the secrets drifting up into dozens of laboratories as scientists release these bubbles during their experiments.  What does each contain?  Scientists are looking for isotopes, trace elements and biological matter.  I wondered about penguin breath, remnants from long ago polar expeditions and gases from Mt Vesuvius.

Meanwhile, Eric and an intern worked with the collection, insuring samples were cataloged correctly, shipping samples to scientists around the globe and monitoring the vital refrigeration system.  They checked on me often, it part curious as to my progress.  I suspected they were skeptical of anyone being able to really draw the cores; they had been looking at them for years and knew intimately their transparent delicate beauty.  But they were probably also making sure I didn’t slip into quiet hypothermia.  All of the staff offered helpful advice about staying warm (eating a big fatty breakfast works) and doted on me a bit to insure my safety.

Though I spent most of my time in the balmy examination room, the cores are stored in the really cold part of the freezer at -35 degrees Fahrenheit.  Rows of shelves are stacked with aluminized cardboard tubes, like books waiting to be read.  I tried to imagine the glaciers and ice sheets represented here, some larger that the Continental United States.  I amused myself contemplating what these cores represent: snow compressed by more snow for thousands of years, then drilled and taken to a warehouse in Denver.

There was a lot of activity at NICL revolved around preparing for the deep ice core at The West Antarctic Ice Sheet (WAIS).  While I made sketches of the ice, Curator Geoff Hargraeves and Assistant Curator Brian Bencivengo were busy packing supplies to fly to the WAIS camp in two weeks.  The WAIS is approximately 3.5 km deep at the camp.  The core taken from this ice sheet is projected to provide one of the most complete records ever obtained of atmospheric conditions for the past 100,000 years.  Several agencies work together to extract and prepare the ice to transport back to NICL.  They inspect the cores, oversee initial visual recording, electrical conductivity testing and catalog each sample before it is packed for shipment.   There’s lots of great information about the project at http://www.waisdivide.unh.edu

I was impressed with the ingenuity needed by staff to create equipment for processing, studying and storing the cores.  There is no “Ice Cores Supplies-N-More” store.  Most of the tools are modified to use with the ice and endure the extreme cold.  There were chunks of insulation wrapped, boxed and wedged around, beside and between objects.  This improvised engineering appeared haphazard, but there is nothing random about it.  Everything in the lab is the product of multiple iterations and creative tweaking.  These guys have years of experience using and repairing their tools in harsh environments.

Why should we care about a place as remote as the West Antarctic Ice Sheet?  First, data from this and other ice cores helps scientists create accurate models of past climate conditions and the effects of atmospheric gases on climate patterns.   This information can affect government policies to reduce excess production of greenhouse gases and also to better predict possible ice sheet melting and corresponding sea level rises.

On my way from the airport into Denver, I took an exit off of the freeway to find a grocery store.  The airport is laid out on the prairie, 30 miles from downtown beyond even the fabric of Denver’s sprawling exurbs.  Inevitably, a housing development had sprung up.  This is the exit I took.  Hundreds of houses lined dozens of cul-de-sacs and lanes off of a central “boulevard”.  There were no signs of a school,  community center, or a grocery store for that matter.  The entire complex felt abandoned.  There were no parents with strollers, no kids on bikes; I was sure a zombie mob was just around the next corner.

An uneasy feeling settled into my gut as I drove down the miles long four-lane entrance of the development with its manicured median and a lone landscaper walking along with a gas-powered leaf blower moving nothing but a bit of dust.  Perhaps it was the cold, but while staring into the clear frozen columns I had the sense that the ice was silently offering an undeniable truth about our culture’s unsustainable habits.