Today I awoke at 4:30am to get to my first ever military flight.  It was a C-17 from McChord Air Force Base, near my hometown of Seattle.  It was very similar to checking in for a commercial flight, except all the crew wear fatigues.  Once aboard, there was the same safety talk about seat belts and exits, except that as the plane powered up, we were handed our own set of earplugs instead of pretzels.

We sat in fabric seats along the sides of the plane with pallets of cargo strapped down the middle.  It was incredibly loud, so we all sat in earplugged isolation, smiling politely, excited to be heading south with reports of good weather at McMurdo. 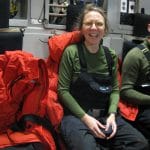 Three hours or so into the flight, I looked out of the tiny port hole and saw ice and the edge of the continent .  At that point, I was allowed into the cockpit to take photos; a rare privilege.  We were flying over an area called Victoria Land.  The tops of the Transantarctic Range poked up like  pyramids.  It took my breath away.  From our altitude, the bergs at the edge of the ice shelf looked like white paint spattered across a blue-black field.    I took dozens of photos and just stared.  It was a beautiful clear day, and appeared so non-threatening.  I kept having to remind myself that we are all at the mercy of this place.

Though I had to buckle in for landing, one of the crew offered to take more pictures and got some great shots, including the edge of the Ross Ice Shelf. It was particularly disorienting to feel the plane landing, but not being able to see out for reference.

We were then all shuttled to the station and the first in a series of “briefings”.  It felt a lot like the first day of college; finding your dorm room, getting bedding, hauling luggage; getting to the galley on time to eat and generally feeling disoriented.  The Station is extremely full right now as many field camps were delayed by weather.  So I am squeezed into a dorm room with 4 other gals.  I am looking forward to having my schedule calm down to take in the area and send back more pictures!  Ciao till tomorrow!