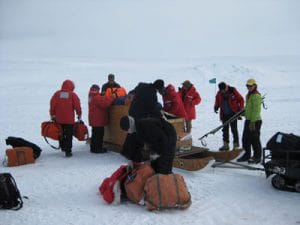 Friday morning I and nine other lucky souls began Happy Camper School with our very clever Kiwi (New Zealand) instructor Billy.  She is in the light green jacket.  Fortunately, it was a Ski Doo camping experience, so we didn’t have to haul our stuff out onto the Ross Ice Shelf, where we spent the next 24 hours.  An ice shelf is a large mass of perennial ice, fed by land based glaciers, that extends out over the water.

This training course is given to all USAP participants who might  go into the field for any reason.  Weather can turn nasty very quickly, so we need to know how to use survival gear, communicate with the station and experience what it is like to sleep on the snow. 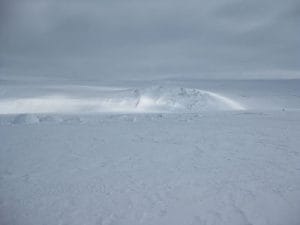 We set up our camp a few kilometers from New Zealand’s Scott Base.  The snow was several feet thick over about 2oo feet of ice.  All around us, islands rose up to define this immense expanse.  McMurdo sits at the end of Hut Point Peninsula on Ross Island.  We were on the east side of this point toward the windless bight.  Mt Erebus was to our north, in the middle of the island.  Across the ice to our south sit Black Island and White Island.  Farther to the northwest, we could barely see Mt Discovery.  To the east the massive shelf and sea ice create a flat white horizon.

The sky was mostly blue and bright as we set up, with no wind – we couldn’t have been luckier.  Setting up the large Scott tents was made easier with many hands.  I had to imagine what it would be like in high winds with two cold people.  A different experience. 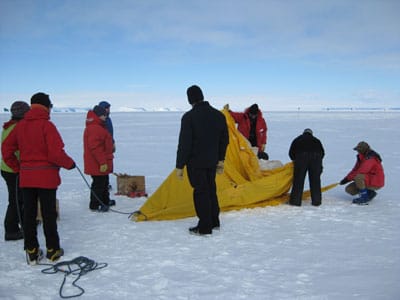 We soon had our entire camp set up, snow on the “cooker” and I was finally able to create a studio shelter and try to sketch.  Unfortunately, the weather has its own schedule and just as I began to a nearby hillside, a fog dropped on it like an eraser on a dryboard. – Check back for Happy Camper – day two! 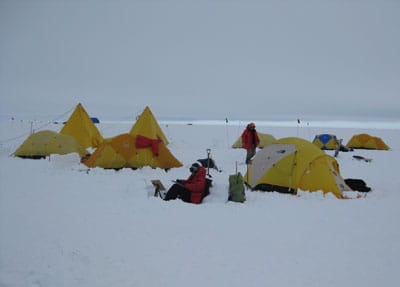