Ice Stories was a three woman show at the Washington State Convention Center on display from November 19th, 2011 to January 19th, 2012. Cynthia Camlin and Maria Coryell Martin and I met through a shared interest in ice landscapes and climate change. We work in different styles which provided an interesting response to ice landscapes as seen through field research, scientific specimens and imagined climate collapse. We first proposed this exhibit to the Convention Center with the goal of reaching a large audience, beyond the subset of people who come into art galleries. 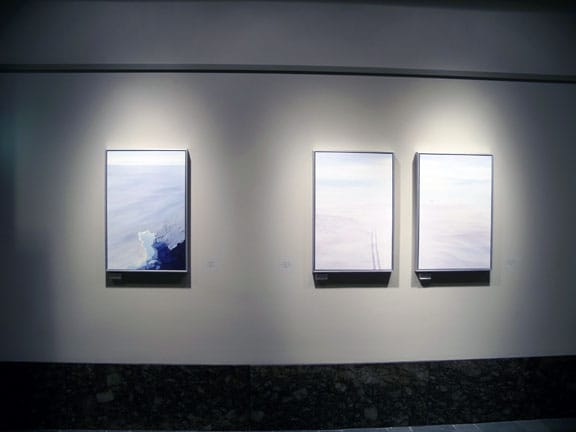 Since returning from Antarctica, I have worked on a series of paintings to capture the space and light. The first of these paintings sit within the ground plane, looking out across the ice plateau, as in the diptych on the right in the above photo. Gradually, as I contemplated the unstable outlet glaciers of this immense ice sheet, I began to alter the ground plane to convey the instability of ice landscapes as in the painting “Break Up” on the left, above. 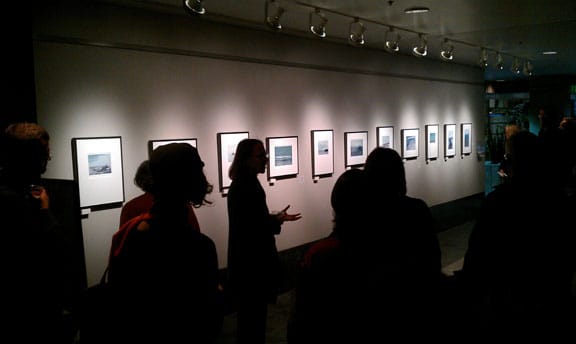 We held a reception on November 13th and each gave a short tour, sharing stories and answering questions. It was a wonderful opportunity to highlight information about the science that inspired a great deal of this artwork. We had several wall text plaques that gave information about the WAIS Divide Ice Core Project and Maria’s field work with Walrus scientists. I also showed about a dozen of the “Camp Stories” etchings that illustrate the field camp on the West Antarctic plateau (in photo above).

Read a review of the show in the Cascadia Weekly