There were 44 people at the WAIS Divide over the holiday weekend; camp
staff, ice core drillers, ice core handlers (who log and pack the ice), a
couple of scientists doing auxiliary research, and others organizing to set
up deep field camps on the West Antarctic Plateau. West Antarctica is beset
by storms and snow winter and summer, therefore, this established camp deep
on the plateau has become a launching point for accessing areas that are
difficult to reach otherwise. 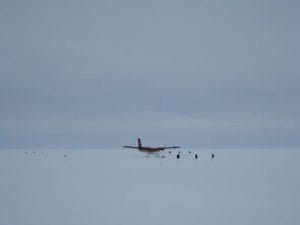 In order to maximize the short season here, the camp works 6 days a week, sometimes through the entire week if things need to get done because of weather or technical delays. When I arrived, the work schedule was transitioning from one to three shifts. The first morning, most of the camp ate together, but by the end of the week, the only times most of the camp was in the galley at the same time was the Sea Level Party and Christmas.
Otherwise, folks are spread out and work in the drilling arch, the galley, communications, outside on the winter storage areas, or grooming the runway and camp. There is an elaborate variety of tasks to keep the camp habitable in this environment. Every few days winds produce drifting that must be
leveled out to make the area passable on foot, ski-doo or planes.
Even with grooming, walking around is a bit of a workout. The snow is fine
and relatively hard, except that it is ever shifting with soft and firm
areas. It reminds me of walking on a beach. My foot sinks a bit into the
drifts and is firmer on the packed areas. Though the accumulation is high
here, the snow packs tight, so we never need snow shoes. 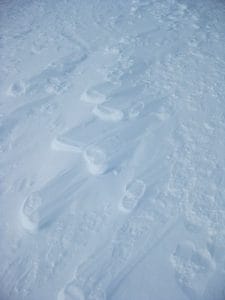 Footsteps left behind after a big wind

I spend as much time as possible walking or skiing around the camp. But I inevitably go inside before I would otherwise because of the cold, especially if I am standing still drawing. I retreat to the Science tent with its small desks where I can use my watercolors and computer. The graduate students and other scientists come and go, working on papers, proposals or catching up on email. We have access to a very low bandwidth (56 bits/sec) server that uplinks to a satellite approximately 5 hours every morning. So I can post these blogs emails to family. Unfortunately, photos are too big to send through this system, so I will post these once I return to McMurdo.
Speaking of my return, I am due to take a flight out of the camp tomorrow, but the wind just picked up so it will likely be canceled.