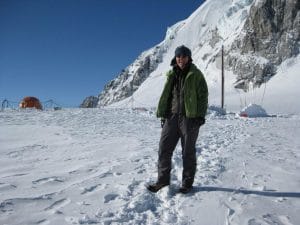 I just returned from an amazing journey into the heart of the British Columbia Coast Range. Mt Waddington sits about 15 miles inland from the inside passage and being the highest peak around, captures a huge amount of precipitation from the Pacific Ocean. This is why Eric Steig (Professor, University of Washington), Doug Clark (Associate Professor, Western Washington University), Peter Neff (graduate student, University of Washington) and a team of other scientists are camped out at 10,000 feet on Combatant Col, directly below the summit. They are there to extract approximately 250 meters of ice from the glacier. This ice will be the first from this region to be analyzed and should offer lots of new information about the climate history of the north pacific, an area without a long record of detailed weather data. 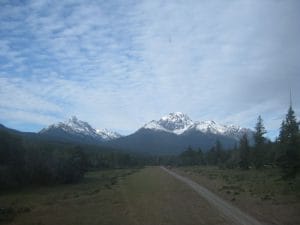 The trip north into the Coast Range took me through a glaciated landscape that looked as if it had recently emerged from under the ice. In fact the land is relatively fresh; the last glacier receded from these valleys less than 13,000 years ago, a blink, geologically speaking. I thought a lot about West Antarctica winding through these valleys. Both of these areas have had ice covering them, are next to a coastline and if (or when) the West Antarctic Ice Sheet melts, it will have an inland water body surrounded by mountain ranges, very similar to the northwest. I began to think about the ice as a shell, covering the earth and suppressing the potential for life. The valleys we drove through felt young and raw.

Once at the White Saddle Ranch, we settled in to wait for good weather and the need for a helicopter trip to bring down ice core from the field camp on the Col. My husband Paul and I spent the next day sketching and made dinner for graduate student Kelley Sterle, who was coordinating logistics and supplies. That night we heard from the field camp that the weather was stable and they had 20 meters of ice core to be taken down to a freezer truck waiting at the Ranch. I was in luck, so began tossing through all my equipment to head up early the next morning. I had to take a full compliment of mountaineering gear in the extremely unlikely event that we would have to climb to a lower elevation (I chose not to contemplate this too deeply). I also took up some sketching supplies and what I hoped would be treats for the research group. 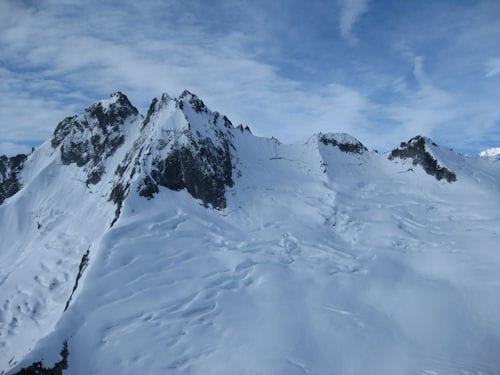 Yes, the helicopter trip was amazing. The exceedingly competent pilot Les pointed out various features as we flew over the valley towards the peaks of the Coast Range, including where he had grown up. The helicopter rose above the green and browns of the lower elevations and into a white and granite land. I was surrounded by glaciers swirling between peaks, broken and cobbled ice falls, steep avalanche slopes striped with crevasses. There were several aqua blue melt lakes glowing in the middle of the scimitar glacier. In about half an hour we crested the edge of Combatant Col, gleaming white in the early morning sun. From our height, the tents of the camp looked like little dots, but the tower of the drill was distinct and I saw several folks waiting at the landing site ready to load the cores drilled the night before.

Camp leader Niki Bowerman gave me a tour and then, like most of the other team, retreated to her tent for much needed rest. Summer daytime temperatures can reach well into the 60’s on the Col, so the team drilled, logged and packed up the cores at night. I set myself up to sketch the two peaks, Combatant and Waddington, that defined the col like two bookends. The other two edges of the Col dropped away steeply to flow down the Scimitar and Tiedemann glaciers creating a slightly bowed table of snow about the size of two football fields. Looking Southwest, dark gray granite spires poked above white and blue and the Homathko Ice Field spread like cheese cake across a range in the distance. To the north, endless peaks floated into the distance. Though not visible, the coast and densely populated Vancouver Island were less than 20 miles away. Unbelievable to me as I contemplated overland travel and listened to avalanches rumble off of Mt Waddington. 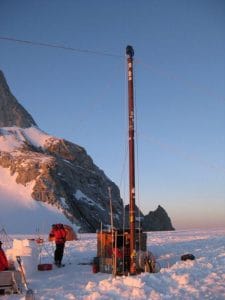 To avoid being sunburned to a crisp, I popped back and forth between my solo tent, the group tent and sketching on the snow. I took a short nap and prepped food for dinner, wanting to stay awake for part of the drilling operation. It turned out to be a good idea given the night ahead. Various members of the crew emerged and retreated throughout the day, but at about 7 pm everyone gathered in the group tent looking for coffee and food to prepare for the nights drilling.

Set apart from the camp, the drill tower stood outside, secured by guy wires. A small box housed the motor and controls to raise and lower the cable and drill. This drill has been operating on remote glaciers throughout the world for several decades, though most of the parts have been replaced over that time. It is a simple, but effective design for drilling shallow cores. The seasoned drill operator, Bella, uses experience and finesse to fine tune and troubleshoot variable conditions. The DISC drill used for the WAIS Divide Ice Core Project, on the other hand, must cut through 2 miles of ice, and preserve the ice at a much colder temperature. This state of the art drill is housed inside a metal arch building and is operated remotely using a complex computer program that receives input from multiple sensors mounted on the drill. I admit to feeling biased towards the relatively low-tech machine, as it appeals to my anachronistic tendencies. But I know that it isn’t capable of pulling up ice and atmosphere trapped in the ice sheet 100,000 years ago.

Now back at my studio, I am using my sketches of the peaks and col to create a triptych of drawings. I grapple with the range of scales and tones of white. The glacier landscapes have a beauty that is so frail and a strength that I am incapable of fully grasping. The white and the wind pushes all other thoughts aside. So I work on the images, my goal to convey a tiny glimpse of these astounding places.