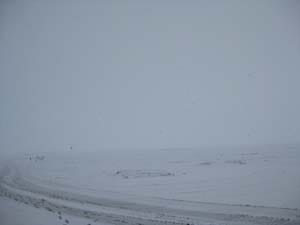 If you can't see the ice runway, then your plane will not come.

Many people here have stories of boomerangs, delays and canceled flights trying to get to or from Antarctica. So I must embrace my situation as a quintessential experience of visiting The Ice. I was originally scheduled to fly out of McMurdo Station for Christchurch, New Zealand on January 5th. This process began the evening before at “bagdrag”. All passengers (or PAX as we are called) literally drag their bags up the hill (or more likely get a shuttle ride) to check in. We must have our Extreme Weather Gear (ECW) in tow.  Checked bags are weighed first, then me, with my ECW and carry on bag in hand. That was the last time I saw most of my clothes and equipment. 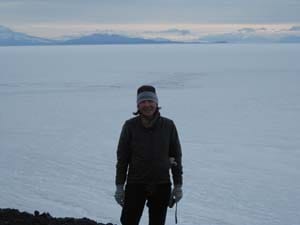 Hiking around Discovery Point at night

The next day, I awoke to learn that my flight had been canceled earlier that morning, so took a walk around town, made what I thought would be my last sketch of Mt Discovery and explored Crary Lab and other nooks and crannies. I also got a chance to see the freezers that house the ice cores from the WAIS Project. To my great reassurance I was given the third degree before the cargo folks figured out who I was, why I might want to see the containers and took me out to see them. The freezers are checked at least 6 times a day to insure their function. From the moment they come off the plane from WAIS, to the moment they are loaded onto the ship northbound, they are cared for by cargo staff. It was great to chat with the friendly guy who happily showed me around the storage area.

The next day, though conditions hadn’t improved, we were instructed to meet for transport to the ice runway. On the way out in the fabulous Ivan the Terra Bus, wind was blowing snow around and we all knew that this was a journey in futility. But the plane had left Christchurch and was a half hour away from the station. There was a sliver of hope that the wind would die down long enough for the plane to land. Especially since among other Distinguished Visitors (DV’s), Sir David Attenborough was aboard, coming to film on the continent. But the flight was aborted or “boomeranged” and returned to Christchurch.

This morning (January 7th) I woke to heavy snow fall and winds, though the plane was initially on delay, it was soon canceled again and I set about hand washing my meager collection of undergarments and am trying to keep myself entertained – hence this story. I also sketched the view from Crary Library again – when in doubt, look at something. Hopefully the clearing weather this afternoon sticks around and the next time you hear from me I will be in New Zealand. 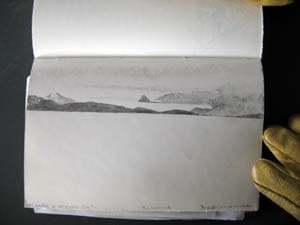 Sketch of the Brown Peninsula and the Pyramid in the distance