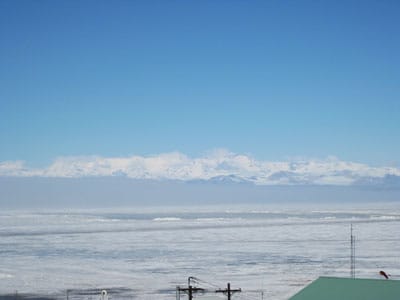 uh-oh!  The day of my flight, there is ground fog!  It is a bit hard to see in this photo, but look at that swath of purplish-blue between the mountains and the sea ice.  I am not due to go out until 14:15, so maybe this will burn off, but I suspect it is not quite like the early morning fog in Seattle.  The fog is pouring in from the south, where I am told the worst weather comes from.  It has been so mild and calm here, that it is interesting to see a change.  Too bad it comes at an inconvenient time.

Yesterday, I ran around getting my gear together, but also had time to join a tour to Discovery Hut.  This is Scott’s hut just on the edge of McMurdo, at Hut Point.  I can walk out there any time, but must join an official tour to see inside.

It turns out, this is just fine with me; the place is a dump!  Super smelly carcasses hanging everywhere and tattered clothes; guys are such slobs! ;-)  I really appreciate my EWC (extreme weather clothing).  Its quite an improvement from 100 years ago. 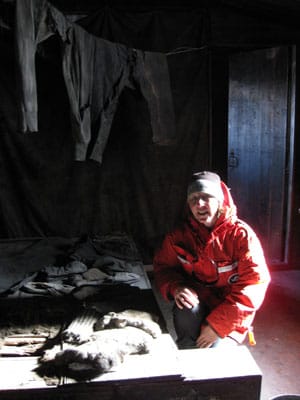 On the walk back to town, I reflected on the processes of historic accretion.  We know more about Scott’s and Shackleton’s expeditions in part due to the artifacts they left behind.  Roald Amundson, on the other hand, traveled light and left very little behind, aside from a tent at the pole – long buried in the ice.

Our current ethics dictate that we also leave no trace on the continent, or at least minimize our trace as much as possible.  So I think it is ironic that one of the best planners and stewards (whether that was his goal or not) of the heroic age is the least well known.  I suppose this is an obvious truth about the preservation of stories, but it felt particularly poinant as I wandered through Scott’s tailings.

Now I am off to make last minute preparations before my flight.  You will know if I got out soon. – Ciao from The Ice!