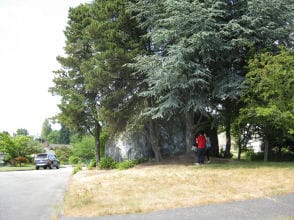 I first saw the Wedgewood Rock while studying the Puget landscape in Graduate school.  I remember being thrilled by this enormous rock sitting in the middle of a modest mid-century suburb in northeast Seattle.  The rock is evidence to the size and power of a glacier that once covered the entire Puget basin.  It was carried along by the ice until it popped out at the terminus of the receding glacier.  Here it remains, the street, sidewalk and houses all flexing to accommodate it.  It is fantastic to see these signs of geologic history juxtaposed with human history.  We straighten, trim and build, but thankfully, some things remain to remind us that we are not in complete control of the land.

It’s a lovely urban walk from my house in Greenwood, passing by a lake, views of mountains and nice neighborhood gardens.   I began at 73rd St. and Greenwood Ave N. , proceeded east downhill to Winona St. and crossed Aurora at the Puget Consumers Co-op, a good place to pick up a snack for the journey.  The road continues east, skirting around Greenlake, but I dropped down to the lake path, walked clockwise, weaving through skateboarders, strollers, and runners, and re-connected to the street at the intersection of N 71st St and Greenlake Way. 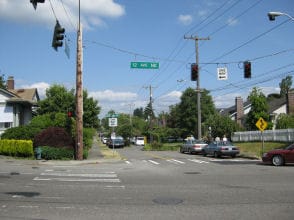 For the next half mile or so, the route wound through downtown Greenlake and over Interstate 5.  I checked out the view of crazy I-5 traffic and soon, at 12th Ave NE, 70th became a quiet residential street.  It was then a straight shot up to 28th Ave NE.  Walking west was another reminder of this glacially sculpted land.   Seattle’s hills were formed by the receding glacier and run north to south, with steep sides.  Traveling to Wedgewood from Greenwood, I humped over three hills.   At 27th Ave NE, I turned left and then right on NE 72nd and the rock was suddenly in view.

I was not the only visitor to the rock that day, while I sat there sketching, several cars slowed to gawk; two teenage boys climbed the rock and sat (smoking a doobie?) talking about girls breasts; a Japanese couple stopped, got out and with map in hand, proceeded to look; Japanese sprinkled with “erratic” and “glacier”.  Just as I was leaving, an older man with a cane strolled up, having gone on his own pilgrimage to be there. 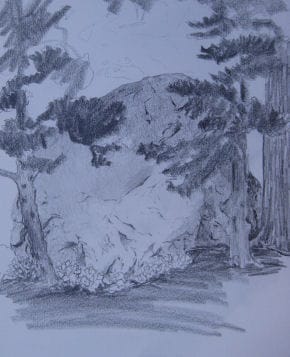 The walk back was suprisingly painless with a nice cafe stop at Greenlake.  The last hill home was eased by thoughts of ripe strawberries in the garden.  Total distance according to Google, 6.4miles.

Posted in Announcement and tagged art