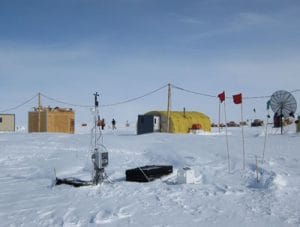 The weather station at WAIS is monitored several times a day to determine wind speed & direction, temperature, pressure and ceiling hieght. Sometimes a weather balloon is launched to confirm the cloud ceiling for aviation.

Weather drives everything in the United States Antarctic Program; flights happen or don’t, camps get re-supplied or don’t, work progresses or doesn’t. Even moderate winds in sub-freezing temperatures can make outdoor work difficult or impossible. Of course knowing weather conditions would make planning that much easier. But predicting the weather here is more complicated, and less precise than I realized.

Most of us are used to “double doppler” radar and other advanced technology to help us plan our day. Though weather becomes difficult to predict more than several days in advance, we can usually rely on the 48 hour forecast. But there is far less satellite coverage and monitoring in Antarctia than almost anywhere else in the world. I spoke with Mike Carmody the head of meteorology for Raytheon in support of the USAP, who, lucky for me, was stationed at WAIS to learn a bit about how weather observations and forecasts are made.

There are two centers in the United States that monitor conditions here. First is the Antarctic Meteorological Research Center at the University of Wisconsin-Madison. They collect and distribute the data from approximately 140 automated weather stations installed around the continent (to compare, the US has weather monitoring every 40 miles or so) and manned stations operated by the US and other nations.  The other is the Navy’s Space Warfare Center, a civilian naval facility in Charleston that takes this data, plus satellite and ground observations from several locations to forecast the weather for aviation.

Like all weather forecasting, a model is used to predict conditions in the future. But here is the thing to remember, models used to predict weather in the United States are informed by over 100 years of continous weather data. Antarctica has only been continously occupied for 50 years, and only in a few locations. So the model that is used to predict weather here is based on very scant data.  Plus there is the added complication of conflicting information between satellite and ground observations. The satellite picture gives a broad sweep, but cannot see under the clouds to determine visibility, etc. The ground observer can describe current conditions accurately, but cannot see beyond that. So operations has to weigh all of this information before sending planes into the sky risking that they might not be able to land in poor visibility and flat light.

It really drove home for me another important goal of the ice core being acquired at the WAIS Divide. Data from the core will give very accurate information for annual temperatures and atmospheric conditions for the past 10,000 years. This will be added to the weather models to improve predictions. In the meantime, I don’t ever go anywhere in Antarctica without my Big Red (the high loft, very warm coat issued to all participants in the USAP)!